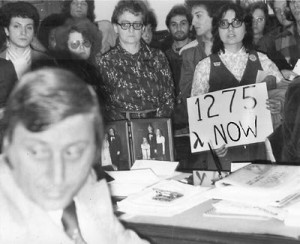 Philadelphia became the first municipality in Pennsylvania to prohibit discrimination in employment, housing, and public accommodations on the basis of sexual orientation. Gender identity was added to Philadelphia’s Fair Practices Ordinance in 2002.

Philadelphia was one of the first cities in the nation to ban discrimination on sexual orientation. City Council voted in 1982 with a 13 – 2 vote.

The Philadelphia Gay News provides an extensive report on how the ordinance was developed – from its beginnings in 1974. You can read the article here.

The 2002 vote in City Council to add gender identity was passed by 15 – 2 and signed into law by Mayor John Street. The National Gay and Lesbian Task Force’s press release in 2002 highlights the history of how gender identity was added. You can read NGLTF’s synopsis on the 2002 ordinance here.

The Philadelphia Commission on Human Relations is a significant City agency which executives duties set forth by the Fair Practices Ordinance with the PHRC and the Fair Housing Commission. The agency has had two openly gay Executive Directors.