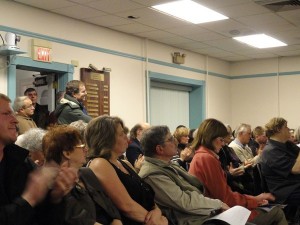 Advocates in Haverford Township began their work following learning of Lower Merion’s move to adopt an ordinance in early 2010. There was significant resistance from a majority of the Haverford Township Commissioners at first. However, Commissioner Larry Holmes championed the effort and introduced the measure. Board of Commissioners meetings were frequently tense, with passionate testimony given by community members.

In the wake of the Lower Merion Township ordinance passage, the American Family Association of Pennsylvania targeted Haverford to stop its advancement – and the potential domino effect of other suburbs following suit. AFA of PA’s Diane Gramely even came personally to a Board meeting from Northwestern Pennsylvania to testify against the ordinance. Before the ordinance was passed, an AFA of PA related group formed called the “Philadelphia Metro Task Force” led by Jim Schneller, who was also a frequent speaker at Haverford Board of Commissioners meetings against the ordinance. When the language of the ordinance was finalized, it was brought to a vote in February 2011 and was adopted in a 5 – 4 vote.

A frivolous lawsuit was filed by a Haverford man in 2011 to have the ordinance repealed. This was used as a claim by some Commissioners to hold off the formation of the Human Relations Commission. The plaintiff passed away in 2012 at 77 years old. The courts have allowed his estate to continue the court case within 1 year or it will be dropped. The Board of Commissioners formed the Human Relations Commission on February 11, 2013, just three days before the two year anniversary of the ordinance’s adoption.