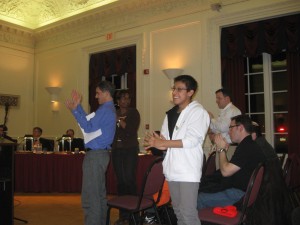 Cheltenham Area Residents for Equality (CARE) was formed by local advocates to lead the community efforts in favor of the ordinance. The CARE Facebook page can be visited here.

Commissioners Receptive to Appeals for Human Relations Commission in Cheltenham and Agree to Start Drafting Ordinance
The Citizen’s Call (September 23, 2011)

Anti-Discrimination Ordinance Up for Vote by Cheltenham Board This Wednesday
The Citizen’s Call (February 14, 2012)

Cheltenham to Vote on Anti-Discrimination Ordinance
The Abington Patch (February 15, 2012)